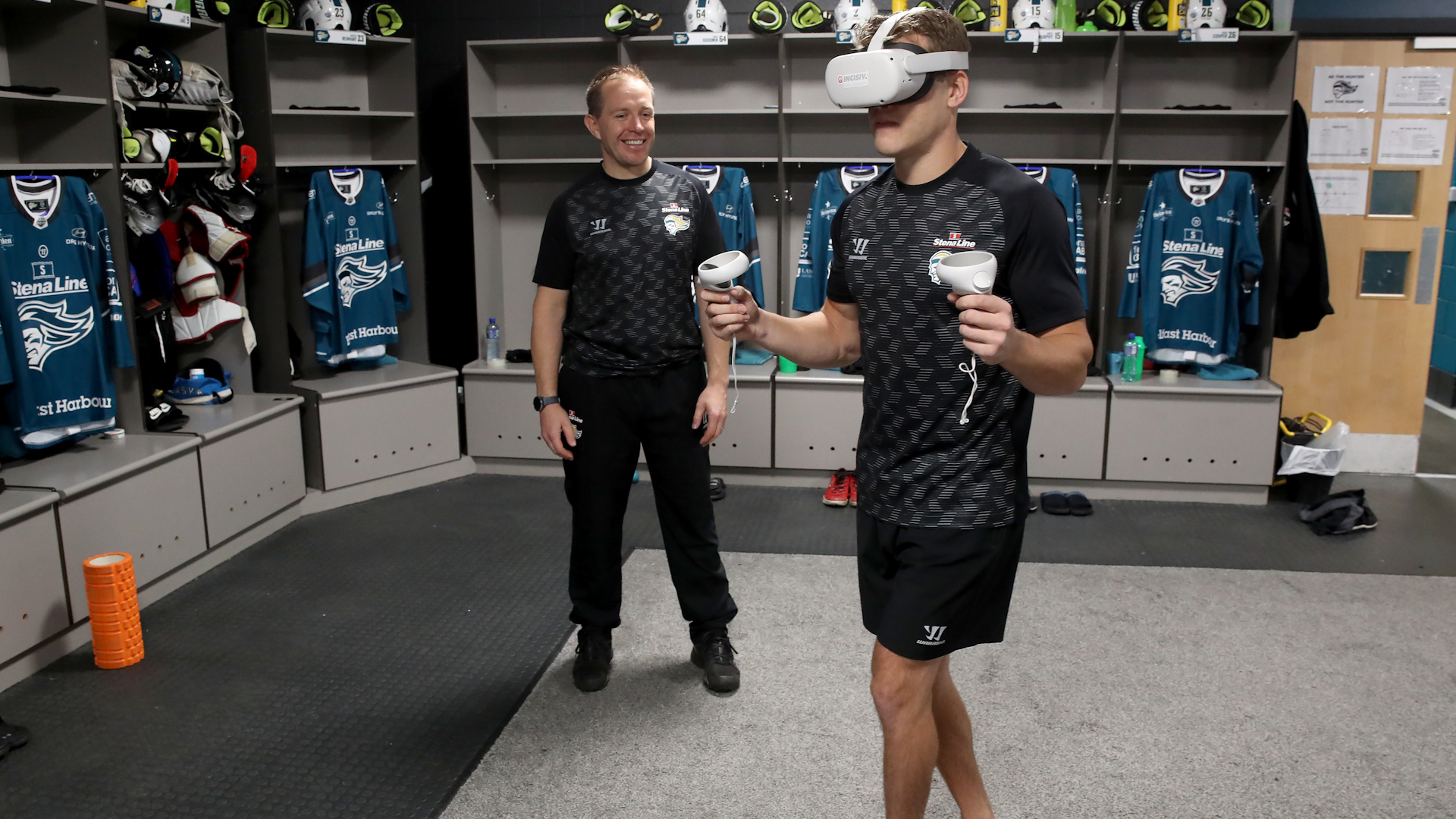 The Stena Line Belfast Giants have partnered with Belfast based sports technology company, INCISIV to tackle the issue of concussion head on.

Rarely a week goes by without the topic of sports related concussion making headlines.

A fast, physical, high-impact sport, ice hockey is central to ongoing discussions around efforts required to improve player safety, mitigate the risk of head injuries, and improve treatment, if a concussion occurs.

Concussion is an injury that can be caused by a physical blow to the head but also by rapid accelerations or decelerations that cause the brain to hit against the skull. With players getting bigger, faster and stronger, collisions between players in contact sports can have the same impact as a 40mph crash.

So what does concussion do to the brain? Professor Cathy Craig, a psychologist at Ulster University and CEO of INCISIV explains: “Imagine a snow globe, where you can see the object clearly inside. Now imagine that you shake it and it is filled with the snow moving around – that’s a bit what it’s like for your brain when you have a concussion.”

Essentially concussion causes a temporary disruption to the complex communication that exists between the brain and the rest of the body. This makes simple tasks like buttoning a shirt, walking in a straight line, or remembering a short sequence of numbers, difficult. The problem though is these changes to behaviour are often quite difficult to spot.

INCISIV’s new technology aids diagnosis and treatment, as Professor Cathy Craig explains: “Every brain injury is like a fingerprint: it’s individual, it’s different. With our VR software we can measure what’s normal for each individual – that means that if they do get an injury, we not only know how much it has affected brain function, but we are also able to help with recovery.”

WHAT DO THE BELFAST GIANTS THINK?

Steve Thornton, head of hockey for the Belfast Giants says the new partnership is a core part of the team’s player welfare strategy. Commenting on the partnership, he said: “Player welfare and safety is a top priority for the Belfast Giants. Ice Hockey is a physical sport with lots of contact and we want to make sure that we are doing everything we can to protect our players. It’s incredible to be able to access this type of technology to help aid our efforts to keep players safe and it’s even better to have such fast access to this tech, with the INCISIV team based here in Belfast.”

Belfast Giants’ head of physiotherapy Dr Mark Matthews loves the technology; data highlights any red flags or areas the player needs to work on to return to play safely, meaning he has confidence in decisions to put players back on the ice.

“Most tests we use today are not sensitive enough” explains Matthews. “Clinically I can see subtle deficits and guys report symptoms, but it’s so hard to measure them well and accurately. With this technology we can be more sensitive, accurate and challenge multiple systems at once.”

So, what do the players think? In November last year, Belfast Giants forward Tyler Soy was injured playing against Dundee Stars and was one of several players using the technology to monitor when it was safe for him to return to play. Commenting on his experience, he said:

“I thought it was good, I’ve done these tests a number of times now because of the concussion I had, and I felt like they were really useful and definitely gave me more confidence coming back.”

Head coach Adam Keefe says the technology is an important tool, helping to ensure players don’t return to the ice too early, but also that they perform at their best:

“We certainly don’t want players out there unless they’re 100%,” explains Keefe. “That’s about their safety and health first and foremost but also because we want them to make good decisions on the ice.”

Ice Hockey is just the beginning for INCISIV and its new VR technology. Professor Craig and her team are working closely with rugby, GAA and football teams to make sure that new, innovative VR solutions are available for other sports too. Fill in the contact form below to find out how your organization can use this technology.