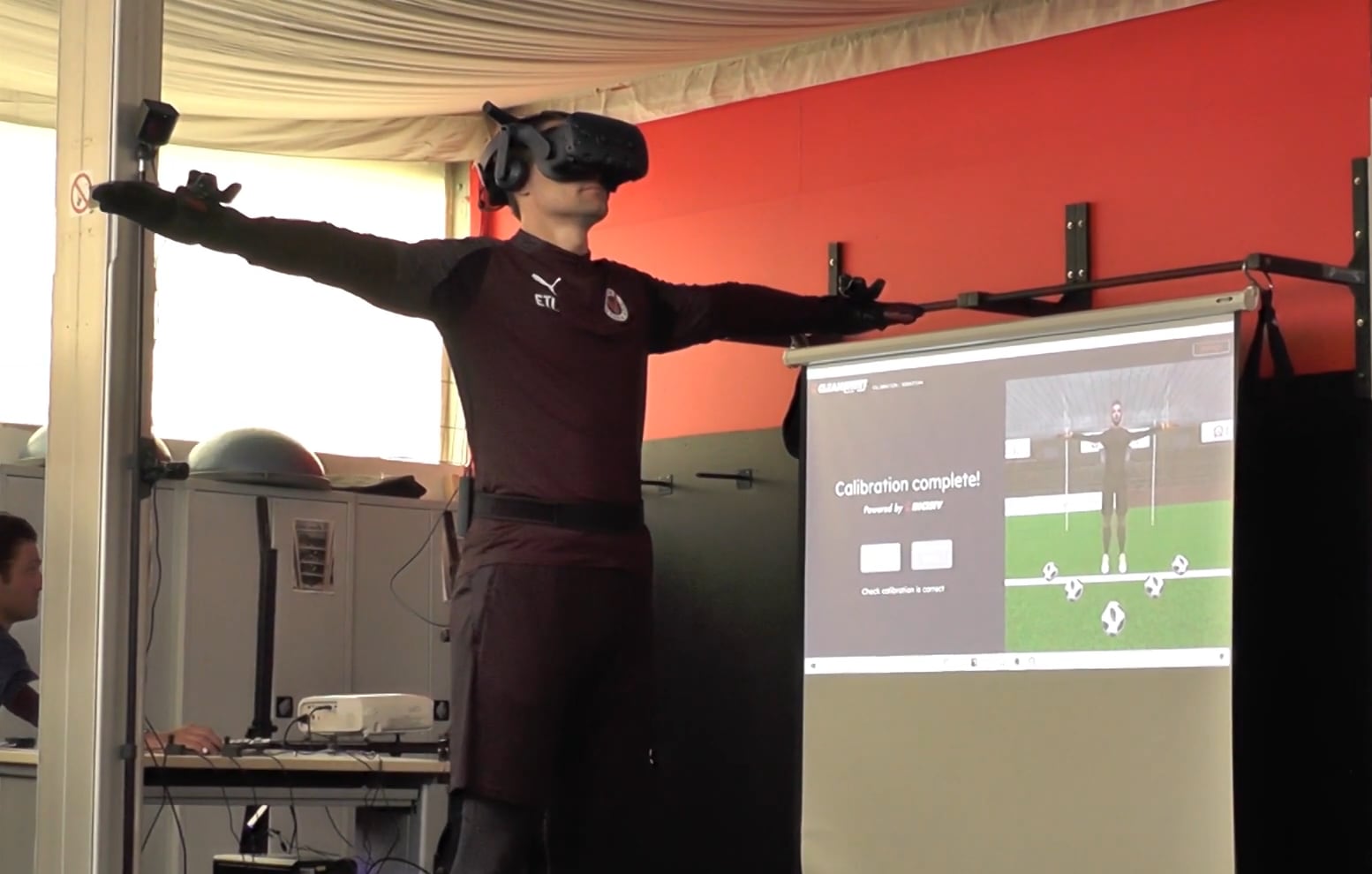 INCISIV’s goalkeeping technology CleanSheet - designed to help goalkeepers make more saves and win more games - is to feature in GK1 Magazine, a publication dedicated to the professional goalkeeping community and distributed to goalkeepers, goalkeeper coaches, managers and Heads of Recruitment alike. Read our extract in the magazine below:

For a goalkeeper, football is a game of anticipation. According to FIFA, midfielders move nearly three times as much as goalkeepers during a match; but when goalkeepers do move, it's a make-or-break moment. Either pull off a match winning save or leave their teammates in despair as the net behind them bulges.

Until recently, coaches relied on nothing but their own eyes to help goalkeepers refine their skills, but now the world of immersive technology is taking the process forward light years. Through head mounted displays units, virtual reality can now be used to analyse their performances in real time and to improve the way they respond to a variety of situations.

This technology has evolved from Craig’s goalkeeping research that began over 20 years ago in Marseilles, France. It all started with that famous free kick by Brazil’s Roberto Carlos, against France, in 1997. Everyone, including the ball boy, thought Carlos’ shot was going wide, but miraculously, at the last moment, bent into the net of an unsuspecting Fabien Barthez.

"Whilst all the mathematicians and physicists were modelling the ball's flight path with their fancy equations, I asked a more simple question. What does this mean for a goalkeeper? Is a ball that bends more difficult for a goalkeeper to read, and if so why?" Craig recounted. At the time, the only way to test how well goalkeepers can read the flight of a ball was to use virtual reality technology. The only technology that accurately recreates what the goalkeeper’s brain sees!

Her free-kick research yielded some very interesting results that go against the grain of what many goalkeepers are taught. Her research showed that goalkeepers who waited longer were able to get a better handle on ball flight and make more saves, compared to those who immediately leapt into action like they would when trying to stop a penalty kick.

In the early days, VR technology was very expensive and the software was difficult to use but in the last few years, the incredible advances in technology have opened up a whole new world of possibilities

So how can this technology help improve goalkeepers? Professor Craig is quick to point out that CleanSheet is not designed to replace traditional pitch side practice, instead she says it should complement it. “CleanSheet helps coaches and goalkeepers design and practice scenarios they can’t do easily out on the pitch”.

With so much data being gathered about professional players, CleanSheet has attracted the attention of some of the finest minds in goalkeeping, no less than football’s first ever specialist goalkeeping coach, Frans Hoek.

The former Ajax, Barcelona, and Manchester United coach who has worked with the likes of David de Gea, Pepe Reina, and Victor Valdes reached out to INCISIV as he identified virtual reality as a way of recreating the chaotic nature of goalkeeping at the top level.

“In the development of goalkeeper practice over the years, there has been a lot of isolation, a small group of goalkeepers and the goalkeeper coach. This means we miss the teammates and the opponents and if you miss that, you are not practicing the real situation”.

“So, the big advantage of course is, when you go into the virtual reality world, you really go into the complicated situation that the game actually is” Hoek adds.

Like coach Berneanou, Hoek believes that CleanSheet offers a great opportunity to make goalkeeping less subjective. “We have to go away from ‘I think’, ‘I believe’, ‘in my opinion’. We must make goalkeeping more objective and collect points that we can actually measure. There’s a big role for virtual reality in helping explain differences between goalkeepers”.

By adjusting the ball’s spin, power, elevation, and angle, the technology can recreate any kind of shot. So instead of the coach or another player repeatedly kicking the ball, the software can provide perfect service every time. Goalkeepers not only get the variability in practice but also the opportunity to try and learn from their mistakes by trying to save the same shot again, something that is impossible to do in real life.

What’s more, given that it is the computer that generates the different scenarios, each goalkeeper can face exactly the same shots. Like sitting an exam at school, coaches can then get a better idea of who the best goalkeeper is, or why a goalkeeper is going through a dip in form.

Hoek believes that one of the main differences between the best goalkeepers in the world and the rest is the ability to read the game. “We often say ‘when they get older, they get better’ which is of course a little strange because physically you develop until you are 23 and after that you begin declining. But if we look at why the older goalkeepers are better, it's because they recognize the game moments faster. Why? Because they have played so many games. And the games actually were their practice”

“So if virtual reality can help us in recognising the situations, it will be a very big improvement already. Which helps goalkeepers be at a higher level, at a younger age, which is of course fantastic” Hoek adds.

Coming into pre-season 2021, INCISIV are looking for 5 more clubs to adopt CleanSheet into their goalkeeping programs.

Dr Stafford says “We are a small team and want to provide a truly bespoke service to a small number of clubs for the upcoming season. This includes re-creating goals, sending detailed analytics reports on each of the club’s goalkeepers, and adding new features to ensure CleanSheet is continually evolving to be the world’s best technology for goalkeeping training and analysis”.

For younger players, CleanSheet’s goal-keeping analytics also helps academies collect data on what aspect of their goalkeeper’s game needs improving, away from the pressures of playing in a stadium.

Dr James Stafford from INCISIV explains how they have been collaborating with goalkeeping specialists to design pre-loaded drills that enhance both ability to read ball flight and decision-making.

One of those specialists is head goalkeeping coach George Berneanou who is using the technology with German team FC Viktoria Köln.

“CleanSheet provides the ability to collect performance data on reaction time and decision-making while offering accurate repeatability. It allows us to objectively evaluate goalkeeping as never before” coach Berneanou said.

One club that is already keen to explore how virtual reality can better profile their goalkeepers is premier league club Everton with new head of academy goalkeeping David Lucas exploring how they will integrate CleanSheet into their goalkeeping program.

“Anything that is measurable about our goalkeepers we want to know. We see CleanSheet as a way of moving away from opinions getting the relevant performance metrics” Lucas notes.

INCISIV is not stopping with professional football clubs either and will release a home version of CleanSheet later this year on the Oculus Quest VR headset. INCISIV has been teasing its TikTok followers with snippets of what they can expect, and the response has been phenomenal.  “We have been blown away by how many young, aspiring goalkeepers are dying to get their hands on a technology that will help them sharpen their decision-making and perceptual skills from the comfort of their own home” Stafford adds.

As football and VR begins to align more and more, the variety of data gathered on goalkeeping decision-making and perceptual skills could increase dramatically. Perhaps the next David de Gea will be discovered with an HTC Vive on their head.

If you are a goalkeeper or coach and are interested in trying CleanSheet for yourself, you can send an enquiry to: info@cleansheetvr.tech